During this season of Lent, A Rocha USA is hosting a series of posts on the theme of waiting, resurrection, and creation care, using the hymn “Now The Green Blade Rises” as inspiration. Full text of the hymn can be found here.

We’re a short way into Lent and, dang, that’s a lot of weeds. They are in the garden, on the side of the road, in the middle of the lawn; they are everywhere. After five years of drought, we’ve had 30 inches of rain in a month. Rain meets dormant seeds, meets post equinox sun and – boom the green weed rises, just in time for Lent. 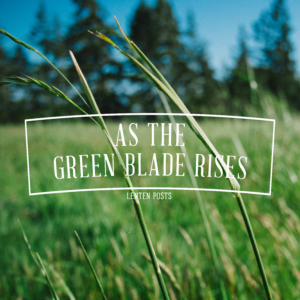 Weeds are the pastoral equivalent of sin and pain. Sometimes it is my job to hear the woes of a suffering parishioner and say, “It is as bad as you think it is.” The way that you are speaking to your wife is actually causing destruction in your family. The pain of betrayal you feel in your friendship, it is real, you were actually betrayed. That fear that is building in your gut as you wait on a cancer diagnosis and it makes sense. It is as bad as you think it is! Now, let’s preach the Gospel to it: Jesus has died to carry that particular sin, that very real pain. He took on the abuse of sinful people so that abusive people could be forgiven and transformed. He was betrayed so that you could be reconciled to God and to one another. He was subjected to pain and death so that all who believe will never taste death, even though they die of cancer. The job of the Pastor during Lent is to “pull the weeds” of sin by the careful application of the good news to the heart of believers. A healthy, specific, connection between the finished work of Jesus on the cross to the very real troubles of today changes the heart, which changes the action, which changes the result. It is the difference between weeds and fruit in the believing life.

Are there weeds in your life? During Lent, find someone to preach the Gospel of Jesus to them. There will be pains, that is, there will be weeds in a world subjected to futility because of the sin of humankind, yours and mine. Lent is a time to face up to the weeds. Look at the sin in your life and pain it has caused to those you love and say, “Dang, that’s a lot of weeds.” Whether it is your sin that chokes out others or the sins committed against you that are waging war against your soul, call it what it is, call by it’s biblical name – that is pride; that is adultery; that is anger, bitterness or self-pity. And start pulling. Ever since the Garden of Eden, the sweat of the brow only uproots weeds. Labor at it. Labor, all the while knowing that that after you pull them up more will come and so on until we ourselves become fertilizer for a future generation of dandelion.

This calls for an important biblical clarification. It would be easy to see Lent as the time where my hard work adds to the hard work of Jesus, as if He did the big part, but now I have to finish the job. He ran the mower, now I am left to the edging. We could also make the mistake of thinking that our labor to pull weeds is what actually makes us spiritual people. But we can only pull Lenten weeds in faith because Easter has already happened. We do not do Lent as if there is no Easter. We do not enter the season as if for the first time. Sure, it is true that there are weeds in our lives, but it is even more true that a seed has already been planted: a spiritual seed that fell to the ground and died, a seed that was planted mortal and raised to immortality, a seed was sown perishable and raised imperishable, a seed that was sown in dishonor and raised in glory, a seed that has risen from the dead as the first fruits of all who believe. And because He has risen, we will also rise.

Robert Campbell is a member of A Rocha USA’s Board of Directors. He also pastors a faithful and healthy church serving the people and place of Santa Margarita, California. He has earned degrees from Biola University, The Master’s Seminary, and a Doctorate of Ministry from Trinity Western University.