‘Oh no, they flooded. Look, the waters stopped at their front steps. Wow, the bridge collapsed.’ My mother and I were watching an aerial drone video of her neighborhood in southeast Texas in the days following Tropical Storm Imelda, which hit just two years after Hurricane Harvey devastated the area in 2017. For many, Imelda was Harvey 2.0, a wash of relentless rains that brought catastrophic flooding. My mother happened to be up north visiting me, my husband, and our children at this time, leaving my younger brother in the house to weather the storm on his own. (He was a nervous wreck, watching the waters rise and close in on the house.)

Their house didn’t get inundated this time, thankfully, but many others did. In my high school hometown, so many were once again ripping up soggy carpet and drywall, sorting through what could be salvaged. The long ordeal of bureaucratic red tape for insurance reimbursements and FEMA (Federal Emergency Management Agency) aid began yet again. Yet those are the lucky ones who have insurance and government support. Others in the US and around the world don’t have such safety nets when coping with fallout from severe weather events.

As I scrolled through the Facebook updates from my friends in the area, I heaved a deep sigh of frustration and lament. Again!? How could a thousand-year rain event happen every other year? Something was amiss.

In recent decades it has become obvious that the earth we rely on is in a state of chronic illness. Forests that supply much-needed oxygen are catching fire and burning uncontrollably. Land that gives us food is becoming nutrient-poor, resulting in deficiencies and illness in those who sustain themselves with the crops harvested from it. Hurricanes, droughts, and heat waves are becoming more extreme and regular events.

The earth, like our bodies, is sending distress signals. Something isn’t right about the way we are inhabiting this planet. And just as we cannot barricade ourselves from the vulnerability and suffering of our human neighbors, so we cannot partition ourselves off from the suffering of the rest of creation.

‘We know that the whole creation has been groaning in labor pains until now,’ says Paul. ‘And not only the creation, but we ourselves, who have the first fruits of the Spirit, groan inwardly while we wait for adoption, the redemption of our bodies’ (Romans 8:22-23). Creation groans. We groan. We are part of this big roiling mess. We are part of creation. Our first disobedience and separation at the Fall had consequences not just for human bodies and relationships; the trauma has been reverberating throughout all of God’s world. When we do not recognize who we are—siblings with the rest of the created order, the whispering trees, tunneling earthworms, and crashing waves—we all suffer.

There is an ‘intrinsic connection between positive or negative human action and the flourishing or diminishing of the non-human world,’ writes theologian Richard Middleton. In Genesis, Cain’s violence against his brother Abel spills over to the human-earth relationship, such that the earth ‘will no longer yield’ its crops to Cain (4:12). Later, in the time of Noah, the whole earth floods as a result of the violence and corruption of the humans who live upon it (Genesis 6). Middleton goes on to explore how the prophets, too, elaborate on the idea of ‘close linkage between the moral and cosmic orders.’[*] Isaiah states:

The earth dries up and withers,

the world languishes and withers,

the heavens languish together with the earth.

for they have transgressed laws,

If our separation from God involved not just other humans but the whole of the cosmos, so too will our redemption bring along the rest of creation.

The wilderness and the dry land shall be glad,

the desert shall rejoice and blossom;

and rejoice with joy and singing.

The glory of Lebanon shall be given to it,

the majesty of Carmel and Sharon.

They shall see the glory of the LORD,

Our healing—our recovery from our chronic separation from God—is not just for us. It’s for the trees, the earthworms, and the waves too. The heavens declare God’s glory; the sky ‘pours forth speech’ and ‘declares knowledge’ (Psalm 19:1-2). The rocks too cry out (Luke 19:40).

How can we pay attention to what creation is saying? How can we tune in to the pain of a groaning creation and recognize the groans as our own? How can we inhabit creation just as we inhabit our bodies—gently, tenderly, noticing, and honoring?

Being out in the natural world is a balm for many. Under a cathedral of trees or in the holy silence of the desert we sense our oneness with all that God has made. We are not alone. We are accompanied in our joy and pain not just by other humans but by daffodils, ladybugs, and sugar maples. 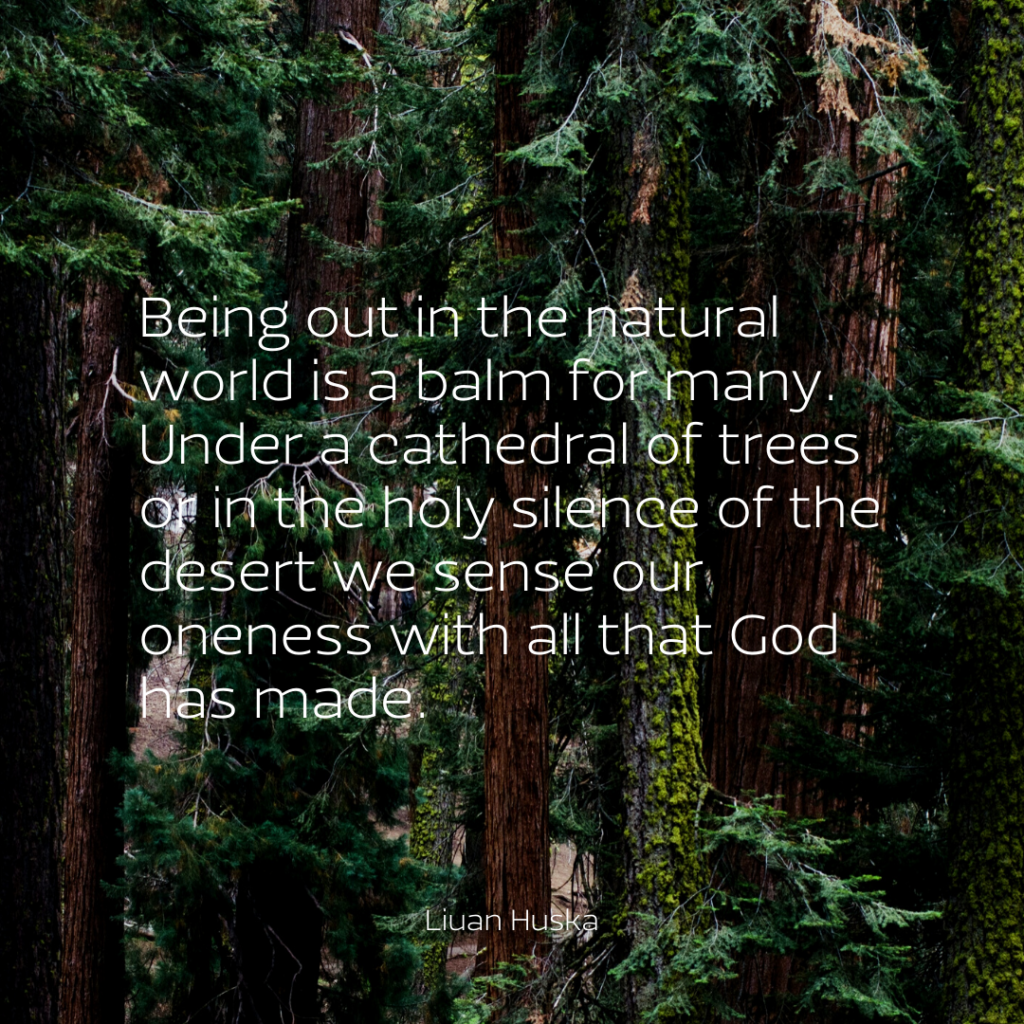 So we tend to the earth as part of our healing. I call my representatives in Congress and beseech them to act on climate change. I plant arugula seeds and mark the days of our COVID-19 shelter-in-place by their growth. I take my children to the forest preserve and point out the mallards quacking in the reeds. I notice new life under these cold prairie skies. I collect in my heart the hints of spring, and—amid a pandemic that separates me physically from other humans—I sense a deeper connection.

Liuan Huska (陈柳岸) is an A Rocha USA board member.

[*] Richard Middleton, “Death, Immortality, and the Curse: Interpreting Genesis 2–3 in the Context of the Biblical Worldview” (prepared for the Dabar Conference in Deerfield, Illinois on June 13-16, 2018).

This blog post was originally posted on the A Rocha International blog.